Home » Bishops Approve the Private Devotion to Our Lady of America

Bishops Approve the Private Devotion to Our Lady of America

Let us pray and hope for miracles through the intercession of Sister Mildred Neuzil [her birth name and used by her in her final years] and Our Lady of America for the solemn procession and permanent display of her statue in the Basilica of the National Shrine of the Immaculate Conception, as a safeguard for our country, as Sister Mildred wrote that she requested and promised. In 2006, I drove a truck and trailer carrying the life-size statue of Our Lady of America from Indiana to the USCCB Bishops’ Conference meeting in Baltimore, Maryland. It was displayed for the Bishops’ veneration at the request of Archbishop Raymond L. Burke. At the 2019 Bishops’ Conference in Baltimore, Bishop Strickland, of Tyler, Texas, joined some of our Apostolate’s volunteers and venerated our Visitation Image of Our Lady of America on November 13th, outside of the conference center. As they venerated the Image, several of them witnessed the miracle of the sun. 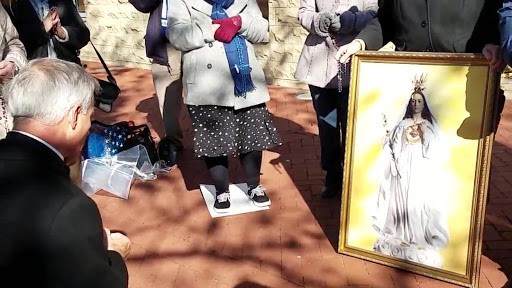 On May 7, six Bishops, led by Most Reverend Kevin C. Rhoades, Bishop of Fort Wayne-South Bend, approved the Our Lady of America Devotion as a private devotion. The Bishops wrote in their Statement, “Given this history of prayers and religious articles being given approval by competent ecclesiastical authority, the use of such prayers and religious articles may continue as a matter of private devotion, but not as a public devotion of the Church. Indeed, such private devotion would be consistent with the history of the United States of America being dedicated to Our Lady.” The Devotion and its elements and practice were previously approved by Sister Mildred’s spiritual director, Archbishop Leibold, and Archbishop Burke wrote that the Devotion was “canonically approved.” This was affirmed in the Bishops’ Statement and they ruled that we may continue to practice it as a private devotion. On January 25, 1963, Archbishop Paul Leibold and Father Daniel Pilarczyk granted the Imprimatur and Nihil Obstat to The Diary of Sister Mildred. It contained prayers and descriptions of the image and the medal of Our Lady of America. This grant declared that it contained nothing contrary to faith and morals. This grant is still valid. In a letter to the United States Bishops dated May 31, 2007, Archbishop Burke reviewed the prior history and the state of the Devotion, as well as the earlier actions of Archbishop Leibold approving the Devotion. Archbishop Burke wrote, “What can be concluded canonically is that the Devotion was both approved by Archbishop Leibold and, what is more, was actively promoted by him.”
The Devotion, as it has been practiced for approximately the last 60 years, may still be practiced privately.
The Bishops’ Statement did not condemn anything, although they did note that the title for St. Joseph as “co-redeemer” was an “error.” However, they did not condemn it, nor call it heretical nor find that it was contrary to faith. The Statement did not issue any directives, orders, rules or regulations. However, Bishops Rhoades wrote in his Singular Decree, “I must come to the conclusion that the visions and revelations themselves cannot be said to be of supernatural origin in the sense of objective occurrences (non constat de supernaturalitate); thus further, I cannot approve or support public devotion or cult.” The Church norms that Bishop Rhoades considered contain 3 categories of conclusions as follows: 1) constat de supernaturalitate (it is established to be supernatural) 2) constat de non supernaturalitate (it is established to be not supernatural) 3) non constat de supernaturalitate (it is not established to be supernatural) Bishop Rhoades’ conclusion is in the 3rd category that the supernatural “is not established”, meaning at this time. He did not conclude, in accordance with the 2nd category, that it is definitively and finally “established to be not supernatural.” Bishop Rhoades’ conclusion is completely open to new evidence, miracles or developments and may be revised in accordance with them if the supernatural is later established in accordance with the first category. It seems that the predominant reason for the conclusion that the supernatural is not established at this time is the lack of miracles. So, let us pray for miracles! The most likely explanation for insufficient miracles is that the faithful failed to do what Our Lady of America desired. Sister Mildred reported in her Diary, approved by Archbishop Leibold, that on September 25, 1956, “Our Lady promised that greater miracles than those granted at Lourdes and Fatima would be granted here in America, the United States in particular, if we would do as she desires.” (The Diary p. 7). So, let us pray for miracles! It is not too late for us to “do as she desires.” If we do so, she may yet fulfill her promise that “greater miracles than those granted at Lourdes and Fatima will be granted here in America, the United States in particular.” If these miracles are granted, there may be sufficient evidence to demonstrate supernaturality and the possibility of a new decree that the supernatural is established. So how do we “do as she desires?” Our Lady of America requested our faith and purity, but America gave her Secularism and the Sexual Revolution. On September 26, 1956, Sister Mildred wrote that Our Lady appeared to and called her children in America to have faith and dedicate their lives to her purity. Sister wrote that Our Lady said,

My child, I entrust you with this message that you must make known to my children in America. I wish it to be the country dedicated to my purity. The wonders I will work will be the wonders of the soul. They must have faith and believe firmly in my love for them. I desire that they be the children of my Pure Heart. I desire, through my children in America, to further the cause of faith and purity among peoples and nations. Let them come with confidence and simplicity, and I, their Mother, will teach them to become pure like to my Heart that their own hearts may be more pleasing to the Heart of my Son. (The Diary p. 8.)

So, let us privately practice the devotion with faith and purity and prayer in the hopes that our response to “do what she desires” will result in the fulfillment of her promise to grant miracles to such an extent that they cannot be denied as supernatural and may result in a decree that the supernatural is established; and the soon fulfillment of Our Lady’s request for her statue to be solemnly processed and permanently displayed for veneration in our National Shrine as  a safeguard for our country. How do we practice the devotion? The elements of the Our Lady of America Devotion are the image; the medal; the Divine Indwelling; the prayers; and honoring St. Joseph. We practice the devotion by displaying, honoring and venerating the image; wearing the medal with great devotion; practicing the Divine Indwelling; praying the prayers and the Rosary, especially as a family; and by honoring St. Joseph, especially on First Wednesdays. You may read here How to Practice the Devotion. In 1980, Sister Mildred had complained to Our Lady of America of her frustration with the lack of acceptance and response from the hierarchy to what she called Our Lady’s urgent pleas and requests, especially that of the enthronement of her statue in our National Shrine. However, she wrote that Our Lady calmed Sister’s fears with these words and said,

Beloved daughter, you are not being accepted because you are a small one. But in the end, all will come as I desire. Those who oppose you will receive light to understand. These good people mean well and if they are in authority it is for you to listen respectfully and obey. I will speak to them in their hearts and the Divine Spirit who makes all things clear will give them wisdom and understanding. In the end they will do as I wish. So, have patience, dear one, it will happen as I have said and those who have opposed me will become my most ardent and courageous supporters. Until this comes to pass, wait in trust, knowing that I never fail those who place their confidence in me. My Son blesses you, be at peace. (The Diary p. 27)

Let us be hopeful and remember that the Divine Mercy devotion was actually condemned and later approved. On March 6, 1959, the Holy Office condemned the Devotion, prohibiting people from distributing its images as well as forbidding them from spreading the writings of Saint Faustina that promoted it. The ban on the Devotion continued for almost 20 years. It was not lifted until April 15, 1978, largely through the efforts of Cardinal Karol Wojtyła, later Pope John Paul II. The Bishops’ Statement said, “The use of such prayers, religious articles may continue as a matter of private devotion, but not as a public devotion of the Church.” Therefore, it is in obedience to the Statement to promote devotion to Our Lady of America as a private devotion. Bishop Rhoades’ Decree simply declared that her alleged apparitions were not established as supernatural and, because of this, he concluded that the Devotion may not be practiced as a public devotion of the Church. The Bishops’ Statement acknowledged that most of Sister Mildred’s writings were approved by her spiritual director, Archbishop Leibold, who gave the Imprimatur to The Diary and to the medal, that, she wrote, was revealed to her. The Diary begins in May 22, 1954 and continues through January 3, 1984 with its final message. It was granted the Imprimatur on January 25, 1963. So, let us practice the Our Lady of America Devotion as a private devotion with faith and purity, as Our Lady of America requested, and implore her and Sister Mildred for sufficient miracles to establish the supernatural and enable public Church devotion and the solemn procession and permanent display of the statue of Our Lady of America in the Basilica of the National Shrine of the Immaculate Conception in Washington DC. Let us not fail to practice the private devotion to Our Lady of America and possibly suffer from what Sister Mildred wrote was Our Lady’s prophesy of a conditional just chastisement. Sister Mildred wrote, in April 1957, Our Lady’s words contained this warning, 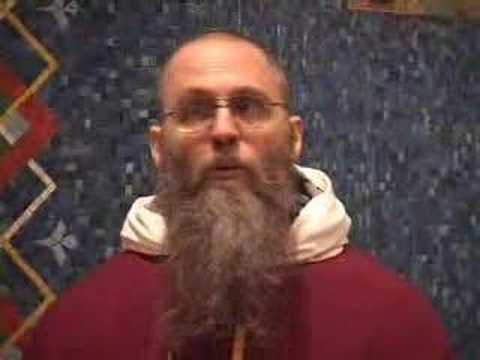