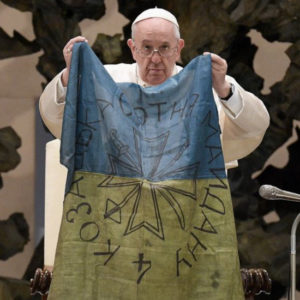 In the photo above, Pope Francis holds a flag up at his General Audience of April 6. He said that it was brought to him from the “martyred city” of Bucha, Ukraine, as a memorial of what he called, “the “horrific cruelties” against unarmed women and children in Bucha. He said that the blood of innocent civilians “cries out to heaven” for an end to the atrocities of war. “Recent news about the war in Ukraine, instead of bringing relief and hope, attest to new atrocities, such as the Bucha massacre, increasingly horrific cruelties carried out even against unarmed civilians, women and children.

“They are victims whose innocent blood cries out to heaven and implores an end to this war. Let us silence the weapons, let us stop sowing death and destruction.”

Ukrainian President Volodymyr Zelenskyy detailed the war’s alleged atrocities in a speech to the U.N. Security Council after visiting Bucha. He said that Russian forces “killed entire families, adults and children, and they tried to burn the bodies. Civilians were crushed by tanks while sitting in their cars in the middle of the road, just for their pleasure. They cut limbs, slashed their throats, women were raped and killed in front of their children.”

Pope Francis entrusted Ukraine to Mary and urged the faithful to pray for people suffering from the Ukrainian War. He said, “May the Lord accompany you and Our Lady keep you. Let us now pray to her for peace, as we think of the humanitarian tragedy unfolding in war-torn Ukraine, still under the bombardment of this sacrilegious war. May we be tireless in praying and in offering assistance to those who suffer.”

I pledge to pray the daily Rosary, as best as I am able, for the intentions of the conversion of Russia, and for peace and freedom in Ukraine, Europe and the world. I also pledge to make my best effort to practice the First Saturday devotion that Our Lady also requested.