Missionary Image Guardian, Karen Kilpatrick of Elmira, New York was troubled by her community’s increase in violent crime, drug-related problems, suicides, New Age influences and people falling away from the Catholic faith. She said, “I really felt that we needed to do something to bring about change and conversion of heart.” So, she arranged for the Missionary Image of Our Lady of Guadalupe to come to the Elmira and Corning areas for more than a month beginning in mid-August.

Karen said that the local Visitation could be viewed as “a response to the prayers of the faithful in the community and the need for hope in these very stressful days. The Blessed Mother is a mother who loves her children very much and comes to remind us that she is always very near to help.”

The Visitation began with a nine-day rosary novena. Each evening worshipers gathered at Ss. Peter and Paul Church to begin a motor-vehicle procession around the city with the Missionary Image prominently displayed. The processors offered intentions for the welfare of the city and surrounding communities. The nine-day novena was dubbed Project Jericho, a symbolic encircling of the city in faith “just like the Israelites did in the story of Jericho,” Karen said. She was referring to the sixth chapter of the Book of Joshua, which depicts the Israelites defeating Jericho after having marched around the city for several days based on instructions given by God to Joshua.

Karen wrote to me: 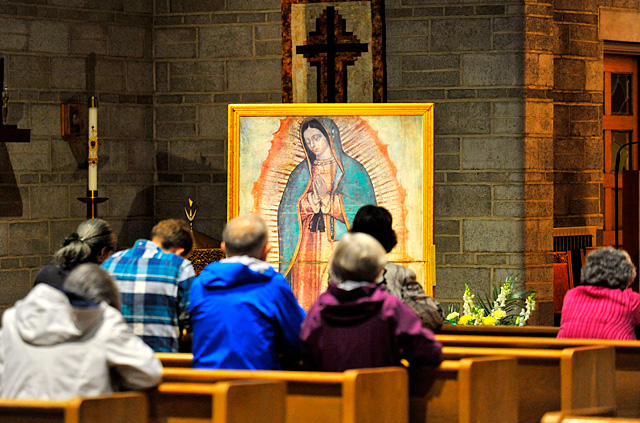 On the first day of our novena, as we finished our opening prayer to the Lord and began to pray our mission prayer to the Blessed Mother a ray of light shot through the church window onto the Image and lit up the front of the church where we were all seated. We had just asked the Lord at the end of our prayer, “ In your tender compassion, make the dawn from on high break upon us, to shine on those who dwell in darkness and the shadow of death and guide our feet into the way of peace.” He immediately answered our prayers!

As we left the church, we saw a beautiful full rainbow that began very close to the church and, as we marveled and praised God, a faint rainbow appeared above the other one, almost unseen. The two rainbows reminded me of Jesus and Mary and how Our Lady would never try to be equal with or try to outshine Him, but would humbly make Him the focus of attention. It occurred to me later that when St. Juan Diego first saw Our Lady of Guadalupe she was surrounded by a rainbow so there must be significance to the rainbow in some way.

The following week we went to Corning, N.Y., birthplace of Margaret Sanger and the home of Corning, Inc. one of the largest donors to Planned Parenthood.

For seven days we encircled the town of Corning as we did in Elmira and prayed at cemeteries, the local community college, at the Corning headquarters, at Margaret Sanger’s birthplace, and others. The local parishioners involved honored our Lady with a triduum of prayers at the three churches in Corning and an afternoon Latin Mass on the last day. 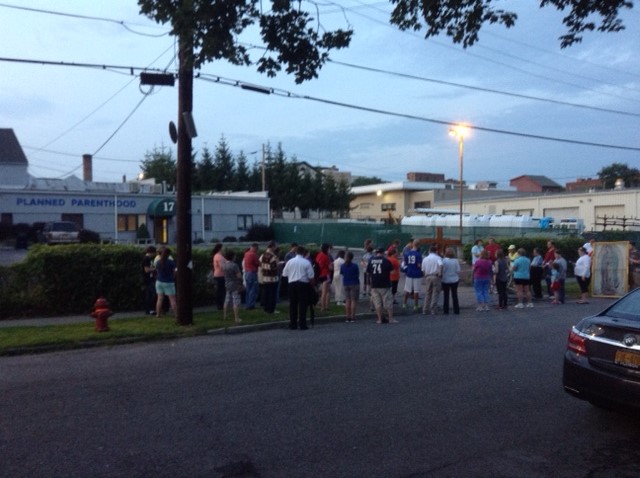 As always, I am so grateful and so blessed to have had the opportunity to be Our Lady’s Guardian and share her with others. She is so generous with all of us and I’m happy to make her more well known and to work with her beautiful assistants. Thank all of you who work tirelessly for her.

If you would like to host a Visitation of the Missionary Image of Our Lady of Guadalupe, click here.