Our Lady of Guadalupe left her self-portrait impressed on St. Juan Diego’s tilma (cloak). Our Lady’s portrait was not painted. The tilma is coarse and not suitable to be painted upon. It has no painted under-sizing or brush marks. The colors of the image did not come from animal, vegetable or mineral elements. The luminosity and brilliance of the colors has remained without any treatment. It is something inexplicable and unrepeatable in the art world.

The tilma should have naturally disintegrated and disappeared within thirty years of the apparition. Rather, it has been miraculously sustained without any preservatives day by day by Our Lady’s intercession until today, almost five centuries later. For all of that time it has been displayed for public veneration at the apparition site in Mexico City.

Our Lady appears on the tilma as an olive-skinned young woman, four feet eight inches tall. She is clothed in Middle-Eastern dress of the time of Christ. However, the colors of the clothing are of Aztec royalty. She is pregnant, which is physically obvious. Gynecological measurements have determined that Our Lady’s image on the tilma has the physical dimensions of a woman in late term pregnancy.

There is a small golden brooch at Our Lady’s neck with a black cross in the center. This identifies her with the Catholic religion. Her figure is surrounded by golden rays of the sun that pierce the clouds. She stands in simple, humble prayer with the moon at her feet, stepping out with her flexed left knee, led by an angel. On her head is a faint crown.

Beneath her feet an angel holds her mantle (symbol of heaven) and gown (symbol of earth) as she marches forward as Queen of heaven and earth. She is the Apocalyptic pregnant Virgin Mother of God, clothed with the sun, with the moon at her feet, and a crown on her head. (See Rev 12).

The Tilma and Science

The divine hand on the tilma is evident through science. In the Canonical Investigation of 1666 physicians came to the conclusion, “There is no natural cause to explain the conservation of the miraculous tilma on which the holy image is represented.”

Dr. Charles Wahlig, a nuclear physicist, supposed that Our Lady was invisibly present when Juan Diego was presenting the roses to Bishop Zumarraga and that the tilma acted like a photographic plate that captured her image and the reflection of Juan Diego in her eyes.

In 1979, Dr. Jose Aste Tonsman, a Peruvian engineer, began digital studies of the eyes in the Image. He magnified the iris of Our Lady’s eyes 2,500 times and, through mathematical and optical procedures, was able to identify at least thirteen people imprinted in the eyes.

Some of these images have been identified as Juan Diego, Bishop Zumarraga and his interpreter. These three people were all present when Our Lady’s portrait appeared on the tilma. It was as if Our Lady herself was hiddenly present looking upon the scene and leaving the sign of her presence in her eyes. Her eyes have the reflection that would have been imprinted in the eyes of any person in her position when Juan Diego unfurled his tilma to Bishop Zumarraga. 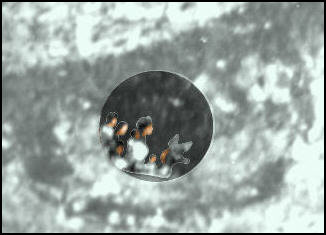 Father Mario Sanchez and Dr. Juan Hernandez Illescas of Mexico reproduced a map of the stars as they appeared in the sky on December 12, 1531, the date of the appearance of Our Lady’s miraculous image. This star map was inverted and overlaid as a translucency over Our Lady’s image. The stars on Our Lady’s mantle exactly coincided with the stars on the star map from the point of view of someone looking down upon the stars from heaven.

Similarly, a translucency of Our Lady’s image was superimposed on a topographical map of Central Mexico. The major mountain ranges on the map coincided with the golden filigree flowers on Our Lady’s gown.

God reserved these phenomena for the modern world to demonstrate to scientific skeptics that the tilma is His miraculous gift. These are the crowning scientific validations of this miracle.

The Tilma as Pictograph

The Indians had no written language. They could not read or write. So God wrote for them in Our Lady’s image. The Indians communicated by painted images in pictographs or codices. The tilma “spoke” to them as a pictograph through its symbols. It was the Indian’s catechism. It taught them by picture-symbols that they could understand when they saw it.

They received Our Lady’s message to them through these symbols and through the words of Juan Diego. After Our Lady’s apparitions, Juan had retired with the tilma to his small hermitage next to the sanctuary that Bishop Zumarraga had erected at Our Lady’s request. Here he lived for the rest of his life. And here the Indians came to venerate the tilma and listen to Juan repeat his story of Our Lady’s apparitions and messages. He did this over and over again, thousands of times until his death at the age of seventy-four in 1548.

The Indians understood that Our Lady was pregnant in her image which was visually obvious and which was symbolized by the only four-petaled flower located over her womb. This flower, known as the Nahui Ollin, symbolizes the center of the universe; the one true God and Christ Himself who was born through Our Lady. It is the Flower of the Sun, a symbol of plenitude, representing the four compass directions of the world, with heaven and the underworld vertically encountering earth in the center. With its placement over Our Lady’s womb, the natives understood that the son of Our Lady of Guadalupe would replace their false god of the sun.

The sash or “cingulum” that is wrapped around Our Lady’s body and tied high above her protruding pregnant womb is a piece of clothing that signifies both perfect chastity and pregnancy. From this and her message, the natives understood that she was the Virgin Mother of the one true God.

From looking at the tilma and listening to Juan, the Indians understood that they were not adoring Our Lady but honoring her as the pregnant Virgin Mother of the one true God. They saw that she came from heaven because she was surrounded by clouds and escorted by an angel. They understood, however, that she was not God because her head was bowed in humility and her hands were joined in prayer interceding for them to the one true God. They heard that this God loved the world so much that He sent His only begotten Son, Jesus Christ, to die for them and that His death was sufficient for all mankind to be saved from hell so that human sacrifice was totally unnecessary and absolutely evil. Human sacrifice ended completely.

The Indians heard that Jesus died on the Cross, as shown on the brooch near Our Lady’s neck, so that they might have eternal life. (See Jn 3:16). They saw that this was the same Cross that they had seen with the Spanish Conquistadors and which they now embraced as their own.

They understood from the tilma that Our Lady, although not God, was very close to Him and was the vanquisher of the Aztec false gods of the sun, which she eclipsed and which radiated from behind her; the stars, which she wore on her mantle; and the moon, upon which she stood. Moreover, in Christian iconography, the crescent moon under our Lady’s feet also symbolizes perpetual virginity and is connected with her Immaculate Conception and Assumption.