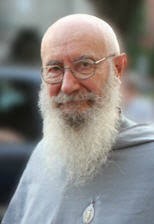 Father Peter remained anonymous as spiritual director until his death. He also advised the Secretary to remain anonymous because he didn’t want her to be unnecessarily subject to scrutiny, but wanted rather that the focus remain solely on the Devotion itself.

Father Peter’s last months were full of suffering.  Eventually, he lost his ability to communicate.  For someone whose life was one of the mind, this was a tremendous suffering. He died from a fall on his head.

Father Peter was one of the world’s leading genius scholars on the writings and theology of St. Bonaventure. He taught dogmatic theology at St. Anthony-on-Hudson Theological Seminary in Rensselaer, New York, for over 25 years. During his tenure, the theological library became a world-class collection. Through the years he also held a position on the Pontifical Faculty of St. Bonaventure in the Seraphicum in Rome.  In 1984, he moved to Casa Kolbe in Rome, where he became the Assistant International Director of the Militia Immaculata, and editor of its publication, Miles Immaculatae. In this position, he became renowned world-wide as a speaker at conferences, retreats, symposia and media events.

In 2015, Fr. Peter’s scholarly genius was recognized by academics at Notre Dame University at a symposium dedicated to his theological writings, including the 6-volume critical edition of the Collected Writings of Fr. Peter Damian Fehlner, OFM Conv.  In 2016, the Mariological Society of America bestowed upon Fr. Peter its highest accolade, The Cardinal Wright Award.

Father Peter and the Secretary of the Devotion exchanged personal tributes to each other. Father Peter gave tribute to the Secretary and wrote, “Your patient endurance as Jesus’ Secretary without seeing regularly many fruits of your sacrifice, has indeed been fruitful.  I can only speak for myself, but I am sure there are many others who are stronger in their faith, hope and love of Jesus, precisely because they made use of Jesus’ gift of this Devotion. “

Likewise, the Secretary gave tribute to Father Peter. She wrote,

Father Peter began to direct me at the end of 2008 and he continued this direction until his death. He was a tremendous blessing to me from God, always guiding me and praying for me. I have always believed him to be a true spiritual father.

Father Peter’s depth of wisdom, his knowledge and understanding were awe-inspiring. Only someone gifted with a special anointing by the Holy Spirit would be able to discern and teach as he did. His tender love of Our Lord Jesus and of Mary Immaculate was also quite evident.

Father Peter was very protective of my identity. He did not want me to be unnecessarily subject to scrutiny but wanted rather that the focus remain solely on the Devotion itself.

The Jesus King of All Nations Devotion was a great part of Father Peter’s later years and I believe has a place in his history.

A proof of the credibility of the Secretary is that she had many doubts as to the source of her messages.  She did not choose to be Jesus‘ Secretary, he chose her.  It is a terrible mental, emotional and spiritual torture for her to write his messages and then to be subjected to the  temptations, doubts and criticisms of Satan and all of his negativity. She humbly submitted herself and her messages to her diocesan bishops and continues to do so to her spiritual director.

The Secretary was always worried that at her judgment at the time of her death, Jesus would say to her, “It was not me!” However, Father Peter told her otherwise. He said that she was a good secretary, but not that good! He absolutely believed without any doubt that her messages were certainly from Jesus himself.

Father Peter assured the Secretary that she was not being deceived in an email to her dated July 23, 2012. He wrote,

I know how you feel about the source of these messages and I can appreciate why such feelings can be so profound. Nonetheless it remains true that even if you had ten doctorates behind your name, all kinds of creative skills and
experience and a sensitive imagination (and neither you nor I approaches this level of human sophistication) you could not have invented these messages, particularly those with intricate detail about me and accurate predictions pertaining to me.  Rest assured, you are not being deceived, or deceiving.

In the Hearts of Jesus and Mary,

On May 31, 2016, Father Peter gave his Testimonial to the Truth of the Jesus King of All Nations Devotion and its remedy for imminent chastisement.

Testimonial of Father Peter Damian Fehlner to the Truth of the

Jesus King of All Nations Devotion

Testimonial to the truth and authenticity of the revelations of Jesus concerning the Devotion Jesus King made to his Secretary over a period of more than a quarter of a century, and the goodness of Jesus in making available to the entire Church, but especially in the USA a remedy for the imminent chastisement under way.

As spiritual director of the Secretary for over five years I have had the privilege of studying these revelations with great care.  This study has left me no doubts, not even minor, concerning the authenticity of these revelations as revelations directly dictated by Jesus to his Secretary and the truth of their content.  This is all the more remarkable, because although the Secretary is in fact a trained secretary, she is not a trained theologian, yet the recorded revelations certainly could not have been composed as they are by her working without Jesus.  Other competent persons have come to the same conclusions.

These revelations are marked by profound content and a style that is clear, sober and convincing, forming a complement to several other devotions revealed by Jesus in the past and recently: to the Sacred Heart, to the Divine Mercy, to the Immaculate Heart, and to the importance of a doctrinal definition of the so-called fifth Marian dogma of Mary Mediatrix of All Grace. That the revelations have not so far been accepted by the bishops to whom they were primarily addressed is not the fault of the Secretary.  The indications of the beginning of a chastisement or chastisements predicted, if the Devotion of Jesus King of All Nations was not promoted, is a further proof of authenticity.

The things which Our Lord told me about myself through the revelations to the Secretary are true to the last minor detail and have helped me to grow in holiness and realize the love of Jesus for all those assisting him in its revelation and promotion among the faithful.

Finally, Jesus has promised to care, and does indeed care for the Secretary in view of the sacrifices she has made in recording and finding persons to communicate these messages to the people, especially as Dan Lynch has done. Miracles have occurred, although not all have been recorded and many recorded only in part.

A Remedy for the Imminent Chastisement

Please join us in promoting this Devotion as what Father Peter called, “a remedy for the imminent chastisement under way.” Read Dan Lynch’s book Chastisements – Preparation and Protection Against Them.

You too can promote the revelations of Jesus King of All Nations that Father Peter believed were “revelations directly dictated by Jesus to his Secretary and the truth of their content.” As a promoter, you will “realize the love of Jesus for all those assisting him in its revelation and promotion among the faithful.”

Please be a promoter and host the Visitation Image of Jesus King of All Nations in your parish, diocese, or home. Is Jesus calling you to be a Guardian of his Image? Please prayerfully consider this and call Lori at our office today at (802) 524-1300 or click here to find out how you can be a Guardian.